Following the links below, you can find images of cross-sections of different Cu-As alloys. In the upper right corner, you have the indication for the percentage of Arsenic, followed by the indication of annealing time (in min.), the amount of deformation (in %), and the magnification (the bars with the indication of size are in a separate image). Just ignore ‘quer’ or ‘copy’ in the filename. The samples were first deformed (and yes, it is possible to deform CuAs-alloys up to 98% without cracking!), and then annealed. All samples are cross-sections.

Here is the overview of samples and treatment:

…be patient with the scratches: The alloys arereally soft after annealing and it wasn’t a pleasant experience to polish these samples! 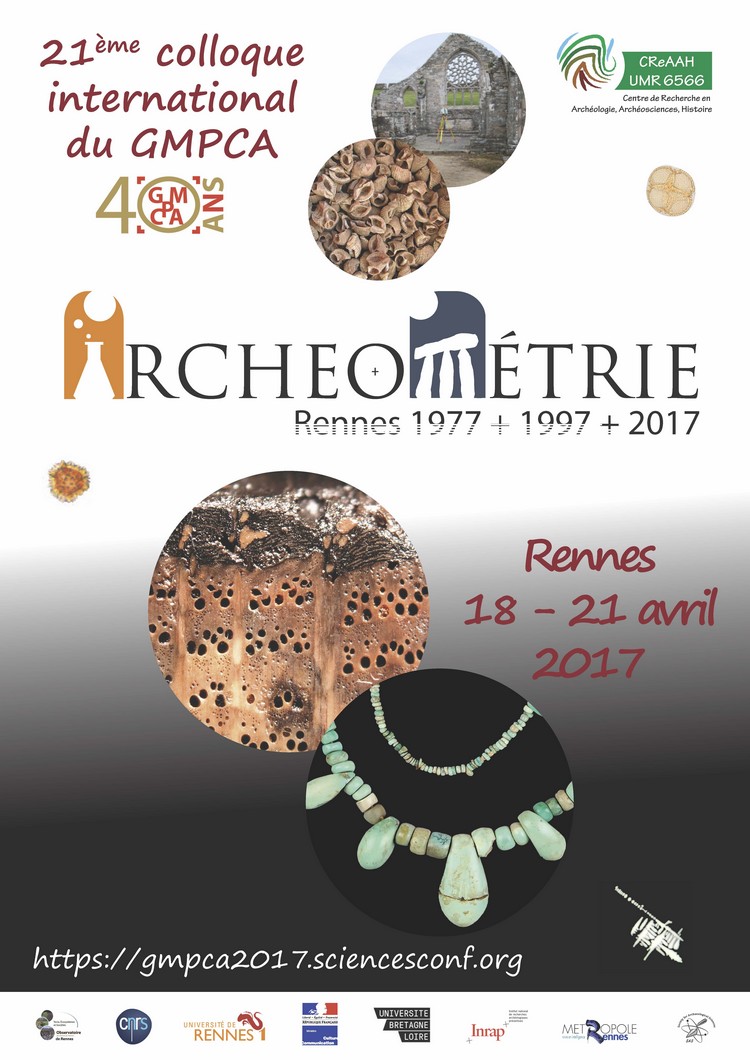 During the last days, I have been at the 21st international GMPCA conference in Rennes, France, listening to a lot of very interesting papers. The conference is THE conference for ‘archaeometrists’ in France and a fantastic opportunity to meet colleagues and researchers of all fields of archaeometry. Together with Benjamin Sabatini I presented a poster on Chemical and metallurgical aspects of arsenical bronze: inverse segregation in prehistoric Cu-As objects. You can find the poster for download here.

The color characteristics of different copper alloys of particular interest in archaeometry (Cu-As, Cu-Sn, Cu-Sb, Cu-Ni) are investigated quantitatively and systematically. By using the CIELAB color system, different color parameters such as a*, b*, and L* were measured by a spectrophotometer in order to describe the surface color. This permits the establishment of a set of color-composition diagrams, demonstrating clearly the connection between chromaticity parameters and alloy composition.

With the evaluated data it is possible to start thinking about the role of color in technological choice, because it allows us to estimate the color of prehistoric metal artefacts with comparable compositions. A better understanding of the association between metallurgical alloy and color will aid the research of prehistoric metalwork because choices in production and use of metal were likely influenced by the particular qualities the material had to offer, of which color is an important one.

The article, which has as co-authors Daniel Berger and Maikel Kuijpers, was submitted recently and will be hopefully published soon. I keep you updated!

Several Late Bronze Age Caucasian daggers were studied in order to evaluate their chemical composition and microstructure. The daggers derive from North Ossetia-Alana, Russia, and are since the 1880ies in the Natural History Museum Vienna. The arsenical bronzes are characterised by a high amount of arsenic (2-5wt.%), as are the tin bronzes by high amounts of tin in the alloy (10-17 wt.%). However, most of the dagger blades studied are ternary Cu-As-Sn alloys. Two arsenical bronze blades show intense segregation of γ-phase along the blades’ surface and the grain boundaries (remember my article on inverse segregation of arsenical bronzes!); some of the arsenical bronze blades also show eutectic, which hardness could be measured. One dagger was made of a tin-bronze blade and an arsenical bronze hilt (see Figure on the bottom). The article will include chemical analyses, metallographic studies, hardness measurements, and Pb-isotope analyses. I’ll keep you updated once it’s published!

Late Bronze Age dagger from Koban, Republic of North Ossetia-Alania, Russia. The colour of the hilt was silverish while the blade had a warm, golden-like colour. The hilt contains about 9.8 wt.% arsenic and no tin, while the blade contains 10.1 wt.% tin, and no arsenic. Today, the dagger is very much corroded, so the original colours of the metals are not any more visible (Photograph: M. Mödlinger, © Naturhistorisches Museum Wien; inv.no. 41.268).

Caucasian dagger blade made of arsenical bronze with 4.5 wt.% As; the hardness of the eutectic could be detected.

Finally, all samples are polished, so I can start with hardness measurements. Here, I would like to thank especially Fabrizio Barberis, DICCA,  and Armanda Barbangelo, DIME, both Università degli Studi di Genova, for the possibility to carry out all hardness measurements with them. In that way, I was able to use both a purely mechanic, historic instrument, and could carry out also μHV measurements on my arsenical bronze alloys, as well as on Late Bronze Age daggers from Koban. The publication of the analyses of the daggers is currently in preparation, and will include chemical analyses, metallographic studies, hardness measurements, and Pb-isotope analyses.

Finally, the project’s first article A Re-evaluation of inverse segregation in prehistoric As-Cu objects is out (others will follow soon). It’s published in the current issue of The Journal of Archaeological Science.You can get your free copy until November 1st, 2016, here. Enjoy!

Inverse segregation in an experimentally chill-cast arsenical bronze with 4.4 +/- 0.2 wt.% arsenic. The feeders are clearly visible.

The study revaluates reported cases of prehistoric As-Cu objects with ‘silvery surfaces’, which are usually interpreted as the result of inverse segregation. Further possible explanations for such surfaces, such as an arsenic-rich alpha-solid solution, cementation, or post-depositional precipitation, are discussed. The segregation of arsenic was studied in As-Cu ingots produced in chill cast moulds at several compositions, which underwent surface treatment with an NaCl solution. The microstructure and surfaces of the As-Cu alloys were analysed using optical microscopy and SEM-EDXS. Special note of out-of-equilibrium As-Cu phases are discussed, as well as a comparison of inverse segregation to all other means of achieving surface silvering.

After November 1st, 2016, you can have access to the article via academia, or just send me an email.

Marianne Mödlinger is a prehistoric archaeologist. Her main research interests include Bronze Age studies, the manufacture and usage of Bronze Age arms and armour, archaeometallurgy of copper alloys, and experimental archaeology.

ArsenicLoss
Create a free website or blog at WordPress.com.